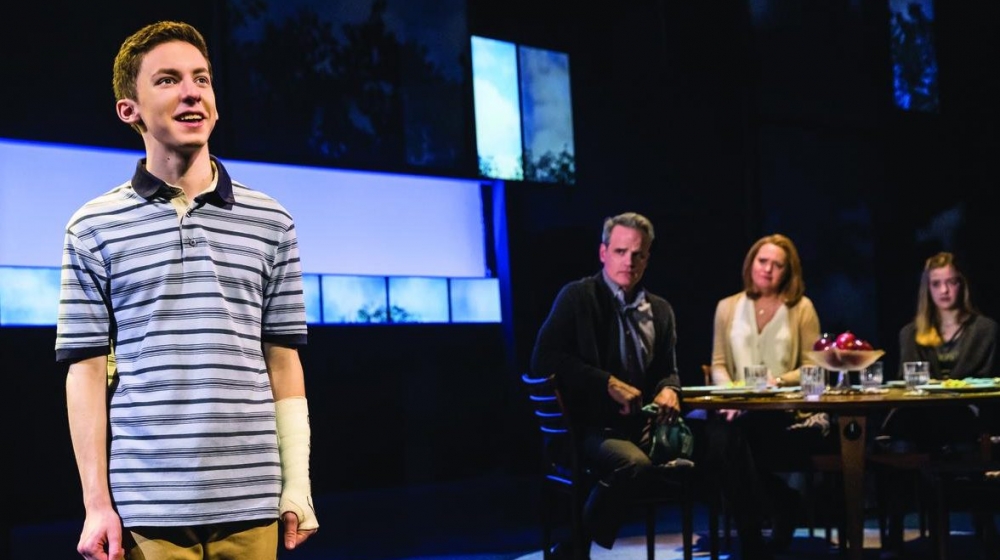 2018 Jimmy Award® winner Andrew Barth Feldman had big shoes to fill. Or should we say, a big polo? Shortly after winning the National High School Musical Theatre Award®, Feldman was selected to play Evan in the Broadway phenomenon Dear Evan Hansen, making him the youngest actor to step into the role—and one of the few people to go straight from high school to starring in a Broadway show. We sat down with him to find out what the incredible journey has been like thus far.

Broadway Inbound: What was it like going from a 2018 Jimmy Award® winner to playing Evan in Dear Evan Hansen?
Andrew Barth Feldman: I mean, it was pretty nuts. That was the craziest few weeks of my life. I couldn’t even fathom the idea of winning the Jimmy, let alone getting an email maybe a week later that I’d be singing in front of Michael Greif, Benj Pasek, Justin Paul, Alex Lacamoire, and Steven Levenson. And I definitely did not imagine getting a call only two days later that I’d get to be Evan. It all moved so fast.

BI: Did you get any advice from the actors who played Evan before you?
ABF: Ben Platt, Taylor Trensch, and Ben Ross have all been such incredible guides through this world of playing Evan. None of them ever gave me advice on how exactly to approach my interpretation of the character, which I think speaks to what considerate, smart actors they are. They know what a personal role this is and how different it will be for every individual that has the opportunity to portray him. They are three amazing human beings and I’ve been so lucky to have them as resources throughout this process.

BI: You’re the youngest actor to step into this role. How have you managed to balance this with everything else going on in your life?
ABF: Honestly, theatre’s pretty much been whole life anyway since I was eight years old. I’ve been good at the balancing act since then. Making time for friends is difficult, but they’ve all been really cognizant and understanding of my limitations and I keep in close contact with them whenever I can. I sort of fill my social life meter at the theater when I get to hang out with this incredible cast. In terms of school, I’m tutored fifteen hours a week at my home, and it’s flexible to my show schedule, so it all works out. It isn’t easy, but as long as I get to be Evan at the end of the day, it’ll all be fine!

BI: What’s the most difficult part about your job? Conversely, what’s the best part?
ABF: I think the insecurity is the hardest part. Because the role is so difficult due to stage time, tears, singing, energy, etc., and because he’s so beloved and iconic, it’s very easy to feel like I’m not the one that’s supposed to be doing this. It’s definitely fueled by negativity online, which there isn’t an overwhelming amount of, but before I knew how much it would harm me, I went searching for it just so I could be aware of all the things that people were saying about me. It affected my mental well-being and my ability to perform with all the confidence that I needed.

That being said, I think the best part is just being able to bring Evan to life without thinking about it, and that comes from the hugely positive responses from the Fansens and everyone who sees the show, and, of course, from working with Michael Greif who will tell me what I need when I need it and when I’m doing well when I am. That’s always a huge confidence booster because if I’m not doing a good job, he’ll give me the tools I need to do so.

Stay tuned for part two of our interview, where talk about what Feldman hopes audience members experience at Dear Evan Hansen, his recommendations for things to do around New York City, and his advice to theatre kids everywhere. For now, you can visit the show page to get tickets to see his outstanding performance in the title role of the show!