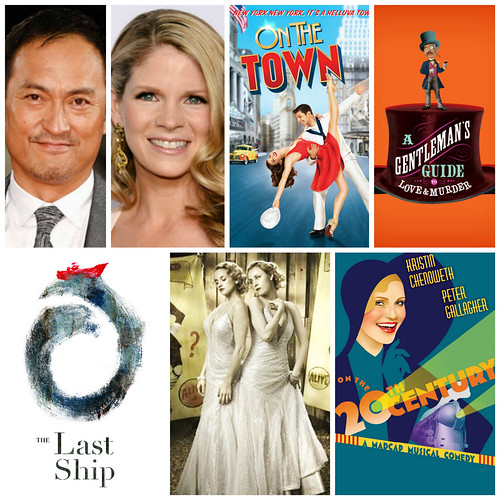 Broadway Inbound’s Broadway Collection has welcomed six new Broadway shows to their portfolio including 2014 Tony Award winning Best-Musical A Gentleman’s Guide to Love and Murder, Sting’s debut of The Last Ship, and the revivals of On the Town, On the Twentieth Century, The King & I and Side Show. These shows round out The Broadway Collection’s already expansive offerings of the best in New York City theater. For international audiences interested in booking new and classic shows ahead of time, the following have joined for the upcoming year:

Winner of four 2014 Tony Awards, A Gentleman’s Guide to Love and Murder tells the story of Monty Navarro, who discovers he is both part of an English noble family and a distant heir to the family fortune. The only complication is there are eight other predecessors. A Gentleman’s Guide to Love and Murder features 111 costume changes as a sole actor transforms into each of the eight predecessors eliminated by Navarro in creative and side-splitting ways.

Contrasting this comedy, Sting’s The Last Ship is a reflective drama set in the English seafaring town of Wallsend. Based on his childhood, it tells the story of a close-knit community centered on the local shipyard. When main character Gideon Fletcher breaks the mold and sets out to travel the world, it triggers a series of events discovered upon his return 14 years later. This new musical officially opens October 26th, 2014 at the Neil Simon Theater.

Opening on February 12, 2015, On The Twentieth Century tells the story of Oscar Jaffee, a bankrupt theater producer travelling aboard a luxury train (the Twentieth Century) with his former flame and Hollywood starlet, Lily Garland. As the madcap musical comedy unfolds Jaffee must convince her to return to Broadway, collaborate on the new musical, and fall for him again, all between Chicago and New York City.

Broadway will also welcome the 2014 revival of On the Town, a classic comedy which is sure to excite audiences young and old, as it drops three sailors on 24-hour shore leave into a larger-than-life storybook of retro New York City. They’ll tour the top attractions and also take a chance at love with their dream girls in this family-friendly musical set to open for previews on September 20th, with an official opening date on October 16th, 2014.

Based on the novel Anna & the King of Siam, Rodgers + Hammerstein’s The King & I revival will open in the Spring of 2015. Set in 1860’s Bangkok, the audience will be regaled by the story of a British tutor to the many wives and children of the King of Siam, with whom she develops an unconventional relationship. Kelli O’Hara and Ken Watanabe are confirmed to star; hailing from Japan, Watanabe’s performance as the King of Siam will mark his Broadway debut.

Also joining The Broadway Collection is another revival, this one a dark comedy based off the lives of conjoined twins Daisy and Violet Hilton. Side Show dramatizes their experience as a popular circus spectacle for gawkers in the 1930’s and features a re-written book and additional songs since its initial run on Broadway in 1997. Bill Condon directs this revival, which begins previews on October 28 at the St. James Theater and opens officially on November 17th, 2014.

Tags: A Gentleman's Guide to Love and Murder, Aladdin, Beautiful: The Carole King Musical, Blue Man Group, Cabaret, Chicago, Jersey Boys, Kinky Boots, Les Miserables, mamma mia, Matilda, Motown, On the Town, On the Twentieth Century, Phantom of the Opera, Pippin, Rodgers + Hammerstein's Cinderella, SIde Show, The Book of Mormon, The King and I, The Last Ship, The Lion King, The Metropolitan Opera