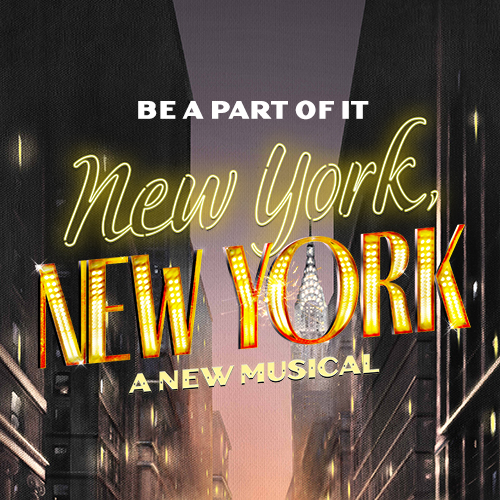 A brand-new musical bringing Broadway legends back together, New York, New York is a glittering love letter to the greatest city in the world.

Featuring an exhilarating new score by the incomparable John Kander and Fred Ebb, an original story by David Thompson with Sharon Washington, additional lyrics by Lin-Manuel Miranda, and visionary direction and choreography by Susan Stroman, New York, New York will whisk you right through the very heart of this city that never sleeps.

It’s 1946, the war is over, and a resurgent New York is beginning to rebuild. As steel beams swing overhead, a collection of artists has dreams as big and diverse as the city itself. But do these singers, dancers, musicians, and makers have what it takes to survive this place, let alone to succeed? If they can make it here, they can make it anywhere.

New York, New York is a spectacular show for a singular city. With a unique blend of dazzling new songs and big band classics (‘New York, New York,’ ‘The World Goes Round’), this jubilant new musical is destined to become the talk of the town.

Be part of it!

Rating: Children under the age of 4 are not permitted in the theatre.

Rating: Children under the age of 4 are not permitted in the theatre.